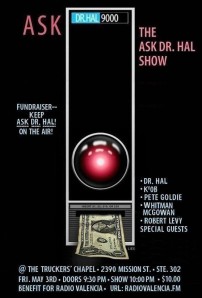 This is a benefit for the weekly Ask Dr. Hal show on Radio Valencia. I will be a featured performer, and I plan on debuting a sharp new jazz soundtrack created by Hollywood film and tv composer/arranger William Ashford to accompany my rather droll Father Earth piece. Help me celebrate the last echoes of Earth Day fortnight and help keep Dr. Hal on the air!.

I want everybody to know I am not just hanging out with some villains on a golf course! I am also making major strides in organizing my next book project, the manuscript of Do You Follow Me?: Fragments of The Jura Lama as interpreted by Trungpa Bumbleché, a monumental work of few words.

At the same time work proceeds apace on the studio album Salon des Refuseés and on the Bruce Litz illustrated book of my best showpieces, titled Uncommon Knowledge, coming out via Zeitgeist Press. 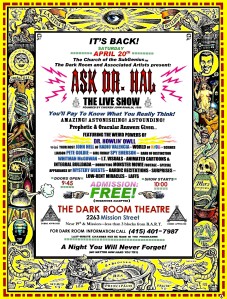 Also in SF I am looking into booking my own variety show at The Beat Museum.

Here are a few intermediate sketches by Bruce Litz for Uncommon Knowledge, the illustrated book of Whitman McGowan performance texts. There are a couple of dozen sketches Bruce is working from, all of which will eventually be rendered in scratchboard.

Once the “Land Of Enchantment” was home to the Anasazi, which means either “the ancient ones,” or “the others,” or “the assholes who we are not,” depending on who you talk to. In the mid 20th century Wilhelm Reich researched flying saucers charging around the Southwest on orgone energy funneling through there. Strange place. You got your Stone Age culture/Space Age culture, cowboy and Indian culture, trucker and biker culture, culture culture (mostly up north), and the ultimate counter culture in mid state in some die hard Socorran separatists. Were their genius alien lawyers able to discover Socorro County was accidentally ignored in the succession of land grants between Spain, Mexico, and the U.S., when in 1953 they declared Socorro a sovereign nation, set up a border, printed their own money? This really happened. New Mexico…Alien Nation!

The Socorrans weren’t even very far out compared to the University of New Mexico DMT experimental subjects who recently communicated with super powerful beings of another dimension in the first USA research in 20 years into mind expanding drugs, experiencing telepathic and transdimensional states akin to Indian trance visions. USA tax dollars could be allowing those folks to talk to aliens, and that could be a very good thing. If we eat more magic mushrooms, will we see no more mushroom clouds?

Just like the Socorro close encounter, where people saw E.T.’s walking outside their saucer around the corner from the coffee shop, just like Roswell it has to be covered up even if it isn’t true those little green men taught you how to do the bop. The Tourist Center people into cigar store Indians. “Out near Radium Springs? People don’t go there no more. We kinda don’t like to beat the tomtom about them Radium Springs, if you know what I mean.” Was I talking to a real person, or had they taken him over?

New Mexico has a lack of most natural disasters: earthquakes, hurricanes, floods, fires. But there is The Lightning Field near Pie Town for you ozone deficient thrill seekers and Albuquerque’s Atomic Museum, which tells very well the story of what happens when atoms go bad. And there exist in New Mexico strong spiritual forces you don’t usually see: the sacred healing earth of Chimayo, Indian and Hispanic medicine men and witches being said to turn into animals or fireballs bouncing off adobe walls and rooftops, and heathen-Christian combo pueblo elders. Singing cacti and talking coyotes and crucifixes, The Manhattan Project and alien astronauts, they all come with the territory.

Big black areas of scorched White Sands real estate mark where test missiles launched from Idaho hit, or where Star Wars laser shots sizzled the sagebrush. If your car fails you out there and you don’t have a cellular, you walk to Star Wars Deli and call Atomic Towing. Dust devils and hail pecked at our off road vehicle outside a bar near the beginning of El Jornada Del Muerto at Las Cruces.

I watched 4 German rocket scientists all order the same dinner and drinks, and I, too, was drinking huge bright blue frozen daiquiris. Jawohl, those 4 king-size “Tijuana Tidy Bowls” sure as shit could’ve wiped out either the taste of cattle mutilations carried out with surgical precision by U.S. govmint employees researching downwind effects of unconventional weapons delivery systems or bad memories of liposuction robot tests for the first probe of another inhabited planet, a pretty stupid operation if they’re here already.

Maybe that’s why there are places named Lemitar, Beklabito, Gabaldon, Sunspot: intergalactic barrios! Si, maybe it wasn’t a Martian who named that town Sunspot, okay. But what about Sena, Rencona, Leyba, Jal, Nageezi, Mogollon, Naschitti? What language is that? So maybe Bo don’t know Navajo ‘cause it ain’t from around here. Somebody should check that out.

Young Mr. Jones in the Woodrose hippie cafe
exclaims to his fellow Christians
“There’s nothing better than good corned beef.”
Well, I can think of one or two things, I thought
beginning with a starry night in Big Sur
after we’d all smoked a bowl of Humboldt
& she & I were 69’ng in a Buick back seat
while our white line feverish driver
got a blow job in front from his wife
& a UFO followed us down the Coast Highway.
The car swerved a little when we all came together.
Surviving that was better than corned beef
you poor, simple, misled bastard. 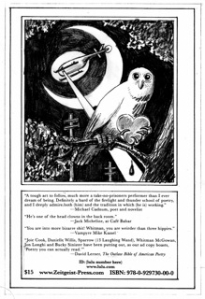 Back Cover of Uncommon Knowledge

My next spoken word and music cd project is an exciting one involving longtime friend composer William Ashford. Most tracks will be ones for which I wanted use other people’s music but have been refused rights for various reasons: composers’ lawyers not wanting a new lyric for signature pieces, musicians not owning their own music, ownership disputes between co-writers’ estates, or my inability to negotiate a fair price. Included are many of my best pieces which I look forward to finally sharing with a wider audience!

Salon des Refusés will be birthed entirely in William Ashford’s Hollywood studio, utilizing his original compositions and music library, and maybe some backup singers (!). Hip-hop tip First Poet in Space (see “Immortal Musings”  page) has a new track and punk ditty Ready to Get Dirty  is slated to be layed down. There’s jazz, rhythm and blues, reggae and a 60’s dance craze number involved too.  If anybody can handle all these genres, it’s William, with his decades long career of working on all sorts of movies, tv and live shows. SDR will also incorporate other pieces we think deserve to be recorded or rerecorded, like the new Frog Poem and perennial favorite White Folks Was Wild Once, Too.

We look to have it out by Friday the 13th of December 2013. Meanwhile, watch out for more news on Salon des Refusés on this blog.

Looky Here! Look What the Cat Dragged in Again

and other discs now available locally at the following locations!

Whitman & discs for sale at The Beat Museum

Poetry impresario Steve Arntson has had a rare cancellation and has invited us to do an impromptu show 7pm Friday at Expressions Gallery, 2035 Ashby Avenue, Berkeley.  The event is free and there will be an open mic. Margery Snyder will read and back me on flute as I perform pieces from the new cd “Look What the Cat Dragged in Again.” Refreshments will be served.  Hey, the Olympic Opening Ceremony has a bigger budget, but it’ll be a rerun and we have the wordsmithery, doncha know?

map from inside panels of cd

For Look What the Cat Dragged in Again, the next cd release party will be in LA on Saturday August 4 but it will be semi-private.  If you haven’t received an invitation already, leave a comment here and a way I can get in touch with you if you are interested in knowing the time and location. Sticking to our strategy of the semi-secret release of the cd, we are nurturing a culture of exclusivity.  The collectibility, the rarity and the quality of this underground spoken word/comedy and poetry with music collection are all undeniable. If you can somehow obtain a copy of this cd, its value can only increase. And believe me, me and my old Hollywood pals know how to throw a party! By the way, a performance will take place as well. Accompanying Whitman McGowan and Trungpa Bumbleché will be William Ashford on piano, Margery Snyder on flute and gong, Baba Ganoush on bass sitar and Swami Saskatchewan on Tibetan horn.

luminarieswithoutboundaries
Create a free website or blog at WordPress.com.